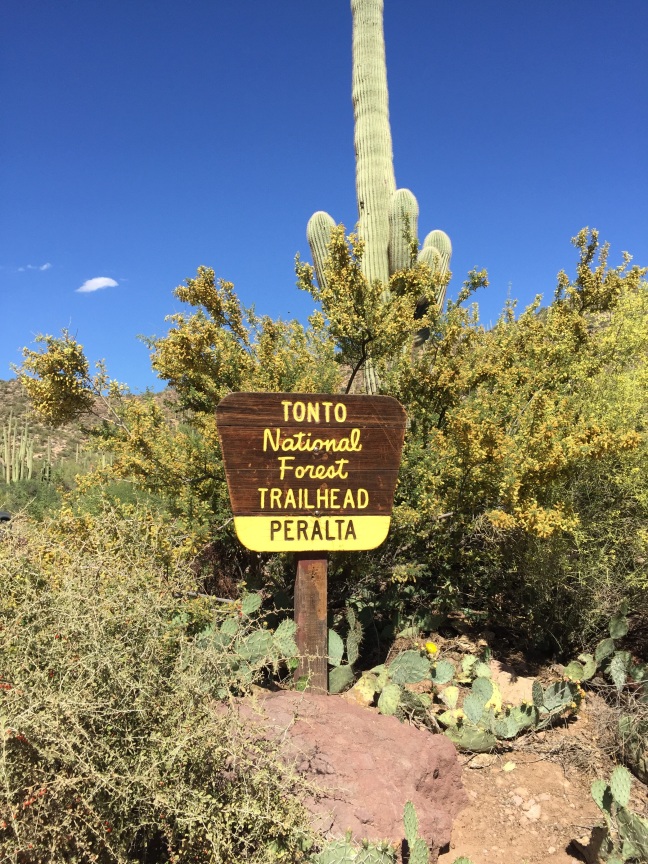 The Peralta Trail is a very popular Arizona hike, and with good reason.  Being a relatively short drive from the Phoenix metropolitan area, it provides easy access to great hiking for the majority of Phoenicians (and snowbirds too!).  Located on the eastern edge of town off of Highway 60, the drive really starts to get interesting once you leave the pavement of Peralta Road near the town of Gold Canyon.  If you’re lucky enough to catch a cactus bloom in the springtime on this section of desert track, you may not even want to get out of the car to hike.  There are so many cactus varieties and my botany background is weak but even I could identify flowering saguaro, ocotillo, and prickly pear, all blooming with different colored flowers.

The hike begins at the Peralta Trailhead in Tonto National Forest, although this forest is probably different than any other you’ve been to before.  This “forest” isn’t full of many trees like you’d see in a traditional forest, but it does have the aforementioned cactus and there are some trees and shrubs along the creek bed.  In those trees and shrubs, you may even have the chance to see an Arizona cardinal.  When the football team moved to Arizona from St. Louis, I thought for sure a name change was in order because I’d never seen a cardinal west of Kansas, but there are real cardinals in Arizona and their color stands out vividly from the desert landscape.

Most people hike up approximately 2.5 miles to the overlook of Weavers Needle and then head back down.  From the trailhead, the first 2.5 miles are almost all uphill with only a few spots along the way to get out of the sun.  Take full advantage of these shady areas as the temperature can get pretty hot on the trail.  Hiking in the spring and fall can offer temperatures that are decent enough, but summer hiking here would be borderline crazy. Temperatures in the Valley of the Sun can reach into the 110’s and sometimes even hotter.  The day of our hike was a near perfect 84 degrees.  Even still, we went through three bottles of water each and wish we would have had more.  As a side note, when I was at Sky Harbor International Airport, one of the souvenir shops was selling t-shirts that read “Keep Phoenix Hot” along the lines of “Keep Portland Weird” I guess.  Clever and I should have bought one!

Once at the top, you get a spectacular view of Weavers Needle and the Nothern Arizona landscape in the distance.  The view is hard earned so savor it, we were really tired and pretty much only stayed for a few minutes.  A family sitting near us had packed sandwiches with them and I think my dad was about ready to pull out his wallet to try to buy one.  At least one of the kids in the family was also packing heat on his belt and had a Crocodile Dundee worthy knife on it too.  Arizona is known for having alternative politics and having kids with guns on a hiking trail is definitely a first for me.  We’d seen a few other hikers with guns holstered along the trail throughout the day.

Next up is down, downhill that is.  Hiking always seems harder going downhill for some reason.  You’re already tired and you’re having to use your legs to slow your body down.  This is also a good time to make sure that you focus because there may or may not be a rattlesnake on the trail, just sayin’!  A couple was stopped on the trail ahead of us and one of them turned up the trail towards us to let us know that there is a four foot rattlesnake across the trail and to be careful.  It was gone by the time we got there but our radar was definitely up from that point on.  The couple also warned another hiker on the trail to be careful and when he got to us he had a walking stick and a holstered handgun.  He said both were for the snakes.  On a serious note, you do need to keep an eye out for snakes.  Every place has its hazards.  After talking with a few hikers, this snake (allegedly – innocent until proven guilty 🐍) had rattled as a warning to a group of hikers earlier.  Here in the desert, the heat is a much bigger concern than the snakes but you need to be aware of both.  Wear sunscreen and a hat for the sun and drink plenty of water.  Walk softly and carry a big stick for the snakes or something like that says Teddy Roosevelt (not to hit them with of course but for gently nudging them to safety off of the trail, for their own good and for the good of anyone walking the trail, something I actually did a few days after this hike).

After finishing the hike, there are many great Mexican restaurants in the Greater Phoenix area to choose from to load up on some of the carbs and sweat you lost out on the trail.  We chose the outdoor seating at Los Gringos Locos in Apache Junction.  I had a margarita, chips and salsa, a Dos Equis Amber, and a cheese crisp (basically an open faced crispy quesadilla) to cap off a great day hiking with family in the Arizona desert.

A light in the forest
Valley of the Sun(sets)
When you don’t see a moose very often, you feel like you’ve taken Nat Geo worthy photos 😂!