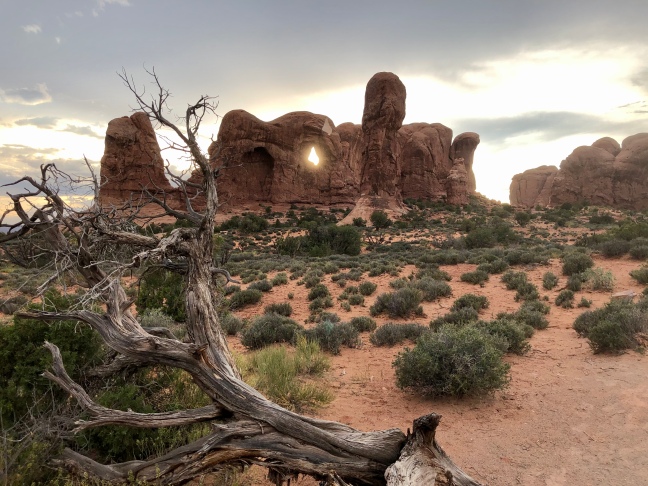 So what does the area have to offer the active traveler? First off, there are two major National Parks just outside of town that are great for hiking and sightseeing, Arches National Park and Canyonlands National Park. Arches NP has Looney Tunes-like terrain which will bring back childhood memories of the Roadrunner versus Wiley Coyote with backdrops like arches, balanced rocks and the reddest side of the color spectrum in the sand and rocks. Canyonlands, for me, is the uncrowded and toned down version of the Grand Canyon. Although the canyon is not as large as the GC, it offers more chances for solitude and is a great place to hike, drive your off road vehicle (on the miles of dirt roads), or even do some long distance cycling on the White Rim Trail.

The area is most famous however, as the mountain biking center of the universe. And the trail that elevated the area to that status has to be the Slickrock Trail at Sand Flats Recreation Area, which is a right of passage for anyone coming to mountain bike in this part of the country. Even though Slickrock is the main attraction for mountain bikers, it will likely not even make the top five rides for most people, but is certainly the trail you ride to see what you’re made of. Other popular trails include Amassa Back, Poison Spider, Porcupine Rim and many more.

Other popular activities in the area include Jeep and OHV trails. Although this is not something that I do when I go to this area, it looks like those who do have a great time. Even in this fairly parched landscape, the iconic Colorado River practically runs right through town. The river is known for rafting (although not really whitewater rafting in the truest sense), kayaking, and stand-up paddle boarding (SUP). The most popular day on the river is the appropriately named “the daily” which is a few hours of mostly lazy river drifting and a great way to stay cool in the heat.

One of the most commonly asked questions about Moab is “will I see snakes or scorpions?” And the answer is that you might. Moab is a very warm place in the summer and being primarily a desert environment, it’s only natural to think about snakes and other biting, stinging creatures. I have been to Moab maybe seven or eight times and have never seen a snake there. I know they’re there but still haven’t come across a single one yet. I have, however, seen a scorpion there. Scorpions are mostly nocturnal and are best spotted using a UV light to locate them. However, I only saw a scorpion because I intentionally went looking for them, had a UV light, the night was quite warm, and my wife was more patient/persistent in helping to find one. Admittedly, I liked seeing one and wish we had seen more.

Last but not least is the town of Moab itself. Moab as a town is probably not a destination in and of itself but it is a little more than just a gateway town like Estes Park, Colorado or Gatlinburg, Tennessee. Moab is extremely close to the activities that surround it. Five miles from town and you’re at Arches National Park. In Moab proper is where you’ll find the world famous Slickrock Bike Trail with Canyonlands National Park being a little bit farther by roughly 45 minutes. You’ll find the Colorado River just minutes north of town.

There are plenty of hotels and campgrounds to stay at, as well as plenty of dining options. One food recommendation I have would be Quesadilla Mobilla. It‘s a food truck (really, a food truck!), and had to be the single best meal in town and is highly rated on Yelp. The food was reasonably priced, the proportions were large, the toppings and sauces plenty, and the taste was top notch especially after a long day of playing out in the desert.

One thought on “Moab”