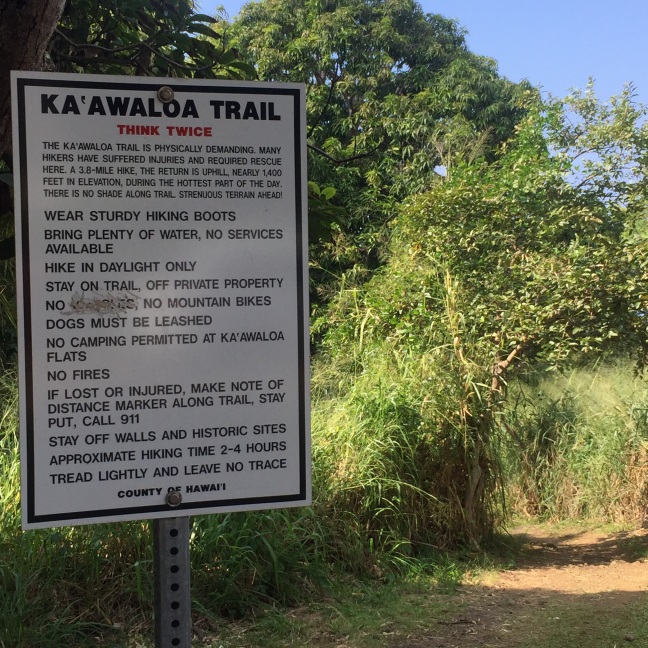 Living at the relatively high altitude of a mile above sea level in Colorado, sea level hikes usually just don’t sound too tough.  So when my daughters boyfriend Anthony agreed to hike the Ka’awaloa Trail on the Big Island of Hawaii with me, I figured we were in for a fairly routine four mile or so hike.  As you can see from the sign above, it basically says that you should be a superhero to safely complete this hike.  I’ve seen signs similar to these before and they’ve ended up being pretty tame considering the warnings (spoiler alert: this sign was spot on).  The hike is primarily known as an alternate method for getting to the Captain Cook Monument.  You can kayak there yourself and try navigating all of the rules (and there are many) set forth by the Hawaii Department of Land and Natural Resources (which we did do too), you can pay to have someone guide you by boat or kayak (which we did not do), or you can hoof it in your Keen’s like me and Anthony did.

The trail down to the water was tougher than I expected it to be with awkward sized stones making the footing loose.  So loose in fact that Anthony wiped out pretty hard right in front of me, drawing blood (which I hear can attract sharks 😉).  He was fine to continue and we made it down to the monument without further incident.

So a little bit about the monument.  The Captian Cook Monument is said to mark the spot where Europeans first made contact with the native population of the Big Island of Hawaii.  Not far away, it is also known to be the spot where Cook met his end at the hands of the Hawaiians over a disagreement about a stolen boat.  There is a white obelisk to commemorate the landing spot and an “X” to mark the spot where Cook was killed.  Some of Cook’s remains are said to be in small caves on the cliffs to this day.  I decided to ask a local native Hawaiian who was sitting right beside the white stone monument what he felt about the fact that this area was set aside to memorialize Cook and his achievement with a large white stone pillar and he said that he wished he could paint it black.  Sore subject apparently (I thought it might be, but felt compelled to ask).  There is obviously also some non-European Hawaiian history here as well.  The ruins of the village of Ka’awaloa can still be seen in the area just a few paces away from the obelisk.

So the hike is nice and the history is fascinating, but the main reason most people go down to monument is for the snorkeling in crystal clear Kealakekua Bay.  We saw lots of colorful tropical fish, coral, and no, Anthony’s wounds didn’t lure in any sharks.  Dolphins were sleeping off in the distance (don’t ask me how dolphins sleep, I have no idea) but we didn’t get close enough to see them while in the water snorkeling.

After being totally refreshed snorkeling, it was time for the 1,300′ hike back up to the trailhead.  What I have learned through the years is that almost every place you travel to, there is always some great equalizing force to make things difficult.  At home in Colorado, the lack of oxygen as you rise can be substantial. In Hawaii, the proximity to the equator and humidity were a substantial challenge comparable in difficulty to the oxygen deprived mountains of my home state.  I have never sweat that much on any hike, anywhere in my entire life.  I was outwardly embarrassed by how soaked my shirt was, but was secretly grinning from ear to ear at the experience. Anthony proved to be a great hiking buddy, the hike was as tough as advertised, the history, the snorkeling, and thankfully no sharks.