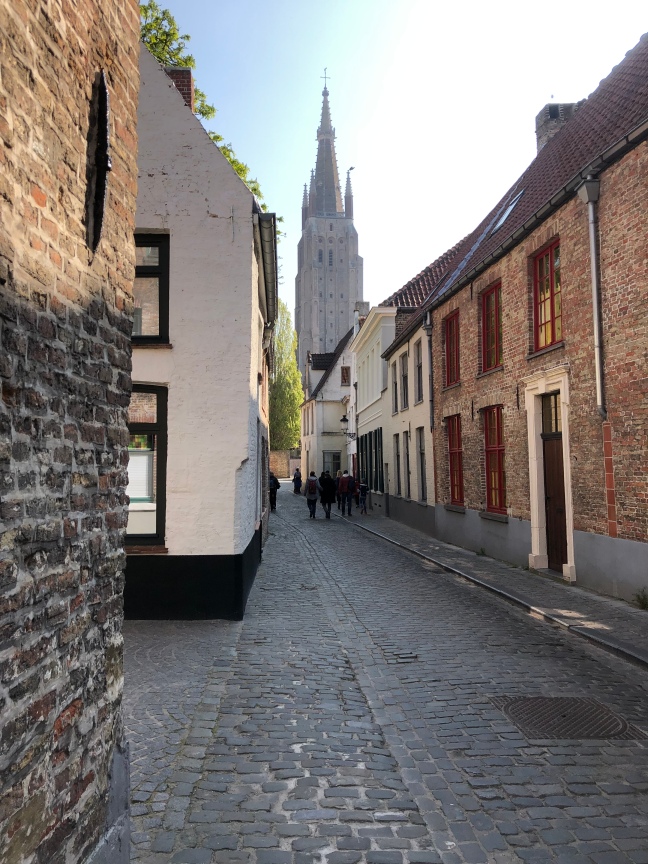 Arriving at the train station in Bruges, you get no hint of what a storybook city you’re about to enter.  The station is small and is packed with day-trippers (including us) from all over the Low Countries and beyond. My father and I were visiting from Amsterdam and took three different trains that morning just to get here and we were eager to breathe some fresh air and stretch our legs.  Following the pack from the station, we began to get our first glimpses of a city that can best be described as stunning.  After just a few minutes of walking, narrow cobblestone streets lead towards the city center and the Grote Market (or Market Square) where shops, architecture, and history all combine to make what has to be one of Europe’s most charming small cities. 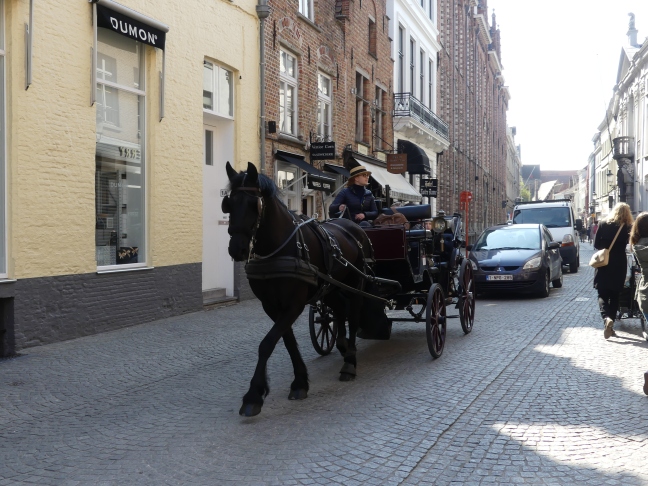 Along the way to the city center are beautiful church towers that loom large over the low lying buildings and shops of this medieval city.  Every step you take into Bruges, the sweet smells of chocolate and Belgian waffles start to assault your senses, especially if you’re hungry after the long train ride and the walk that follows. More on waffles after lunch.

The Belfry of Bruges has to be considered the signature landmark of the city.  This tower was featured prominently in the movie “In Bruges” where Brendan Gleeson met his demise. I desperately wanted to climb the staircase that he did to get up to what has to be the best view in Bruges.  The line for the tower was long and it took over an hour before I was allowed to start the climb up the tower through the narrow spiral staircase.   It took me nearly six minutes of climbing 366 steps to reach the top and I was rewarded with a mind blowing view of the market, the city of Bruges, and the West Flanders region of Belgium.  While at the top, a chorus of bells rang and only added to an already incredible atmosphere. 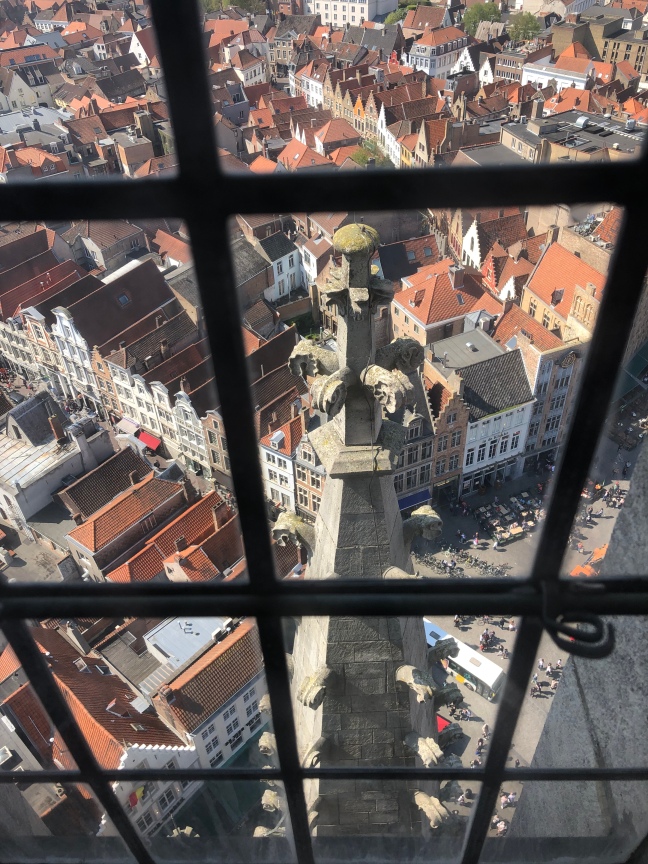 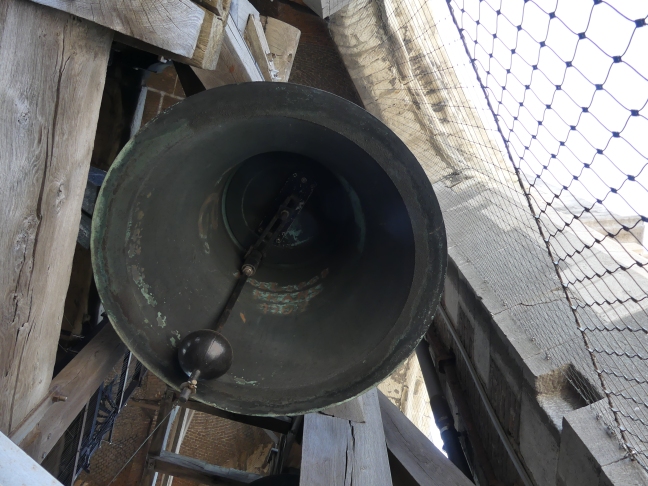 After the climb up the tower it was time for lunch in the square. There are many options for al fresco dining, which I do whenever possible. We were able to sit outside while drinking a flight of Belgian beers and eating Flemish stew, all the while taking in the sights and sounds of this thoroughly enjoyable city. 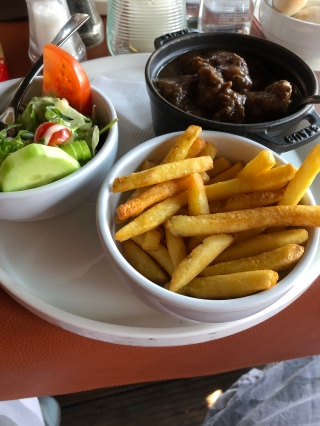 After lunch, we toured the canals by boat, which was a very different experience than the canal tour we had done in Amsterdam just days before.  Bruges’ canals are more narrow and intimate, so touring them was more up close and personal. 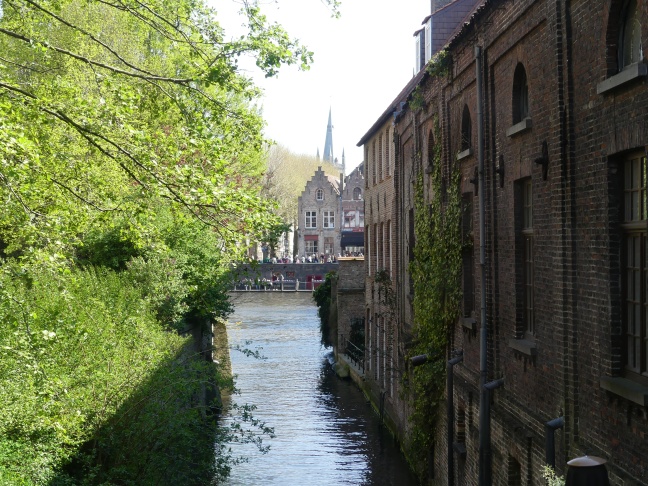 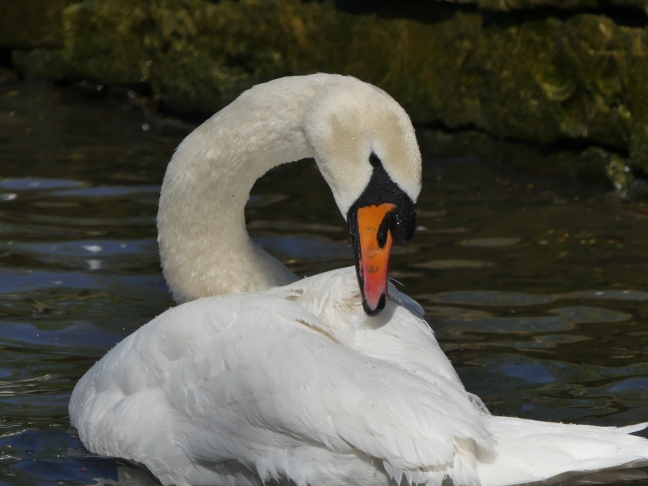 Before heading back to the train, it was of utmost importance to us to have a Belgian waffle…in Belgium.  The signature Belgian dessert is available all over the city and I don’t believe that you could pick the wrong one here.  The waffles are made to order so they are fresh and you have a wide variety of toppings to choose from.  I had mine with whipped cream and caramel.  My dad had his with whipped cream, strawberries, and a drizzle of chocolate.  Pure heaven as you can see from the photo.

Souvenir requests from home mostly consisted of chocolate and there are shops everywhere.  Although I personally don’t really care much for the taste of chocolate, the sweet smells were everywhere.

Photo by @ewallace23
After showing off his crazy good skills, this guy jumped over the pier we were standing on.