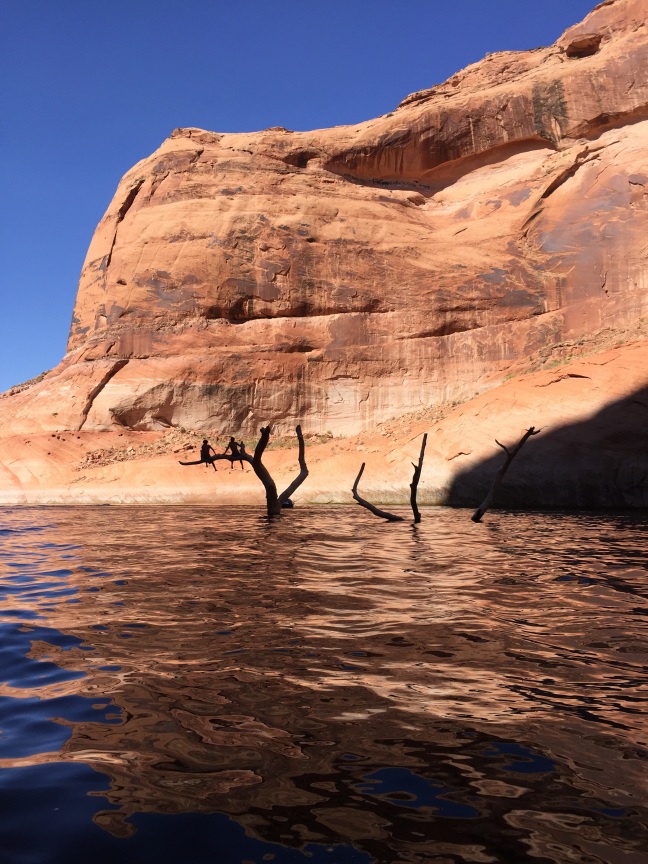 Lake Powell is for those with power! Engine power that is. It is an enormous lake with extensive side canyons throughout, making any journey on the lake one that requires you to have a ski boat, houseboat, or jet ski to have the horsepower necessary to get you from one place to another. On a recent trip there with my wife, our engines on this trip would be our arms, as a kayak, rather than thehouseboat, would be the primary means of getting around the lake.  In a lake the size of Powell, 186 miles in total length and over and 1,960 miles of shoreline, that meant that to get safely off of the main lake and into the side canyons took quite some time and immense amounts of effort. These side canyons are (in my opinion) the prettiest part of the lake and have interesting features such as narrow passages, high walls, calmer water, beaches to take out of and stretch your legs, stunning rock formations and surprises around every corner.

Out on the main part of the lake, boat traffic has to be monitored closely by anyone in a small craft, especially kayaks that lie low in the water. Not all boaters are used to looking for kayaks so you have to paddle defensively, just like motorcycles have to be defensive out on the roads. As they passed, some boaters slowed down a little bit, one slowed down a lot, and once did not slow down at all, nearly causing us to capsize.  It must not be common to see a kayak on this lake because a few looked utterly shocked to see a kayak out there and a couple even looked impressed. However, I think most boaters seemed annoyed by the additional hazard that the kayaks presented. One boater was visibly irritated by us even being on the boat ramp unloading our kayaks.  Lucky for us though, we paid the same fee to be there that he did and was even told by a ranger where to launch from.

We were here the week after Labor Day, just into the off season.  The weather was still very warm as was the water but most of the people were gone, making being on the lake in a kayak during peak season hard to imagine.  Aside from occasionally playing a bit of dodgeball with houseboats, jet skis, and ski boats, the experience of kayaking in the high desert landscape of Utah on such a large lake was a surreal and memorable experience.  Paddling  in the canyons, especially Lost Eden Canyon, was like boating through a maze and as you go deeper into the canyon arm, the water got flatter and flatter, making the paddling very easy.  If there are two things that can make paddling easier it’s light wind and and small waves. There wasn’t much of either of those happening when you get off of the main lake and into the smaller canyons where the boats are fewer, the ones that are there are going slower, and the canyon walls are so high that the winds can’t get in.

Ideally, learning from this experience, having a kayak on this lake would be best if you use a boat with an engine to get you and your kayaks to the side canyons from a marina or boat ramp rather than paddling all the way to them, many miles in some cases. This way, you don’t expend the majority of your energy just getting to the mouth of the canyon arm. Once you arrive at the mouth, you could have many miles of paddling to get to the end (if you choose to go that far) and of course, many back. But if you choose to kayak without the support of a boat, you can still have a great time, and we did, just expect your natural engine to be sore for the next week after you get home!

Hiking through history at Bent’s Old Fort (really it was more of just a walk). This is one of just a few NHS’s that I’ve been to that you can really interact with and that made it worth a stop while in the area.
Out on the plains of southeastern Colorado there are tarantulas! Who knew?
One of the better sunsets I’ve seen in awhile.
Today’s theme is tree stumps! Any of you lumberjacks out there know what the markings are for?