Turks and Caicos Islands (TCI) is not the place most people think about when they think about traveling to the Caribbean, but not because it isn’t the idyllic tropical island of most people’s dreams.  TCI are located just north of the island of Hispaniola and south of the Bahamas. These islands were really just only recently discovered by travelers and the infrastructure to develop tourism is just now gaining some momentum.  But if you’re looking for crystal clear blue water, and by that I mean the clearest and warmest blue water around, this is the place for you!

My visit to Turks and Caicos was to the most developed island in the group, Providenciales.  It is known locally as ‘Provo’ and is served by an international airport but not by cruise ships.  Not having a deep water port for the ships means less people and to me, this is a very good thing.  Provo has what has been voted as one of the best beaches in the world, Grace Bay Beach.  The beach is largely uninterrupted for around seven miles and has hotel properties and beach villas all along its shores.  I stayed on the eastern side of the island in an area called ‘Leeward’ and was happy being there due to the fact that is was away from the hotels and was much quieter than the main part of Grace Bay. Although Grace Bay is quite beautiful, to me it was a little overrated. Beautiful beaches and clear blue water can be found all over these islands and to me, these other beaches had a lot to offer, with a more natural vibe than Grace Bay. Here is a small sample of some of the other places we visited that might be a little lesser known, but were well worth exploring: 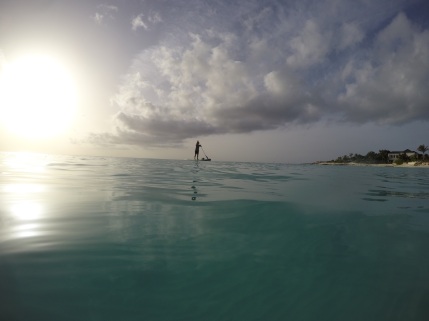 If I had to pick what I thought was the most beautiful spot on Provo, I would surely pick Chalk Sound. The water here is the most outrageous turquoise blue I have ever seen anywhere in the world.  There isn’t much of a proper beach, that I could find, so we rented kayaks to explore the bay. Rent them at Las Brisas Restaurant (sounds weird to rent kayaks at a restaurant but it was just fine) and paddle into the blue.  It’s also a great apres kayak place to recharge.

Provo is a developed island with tourist infrastructure, five star dining, and decent roads.  The islands of North and Middle Caicos are absolutely none of that.  Tourism is virtually nonexistent, finding an actual restaurant was purely accidental (found a good one though in Mudjin Harbour), and the roads weren’t so good and poorly marked.  It was awesome!  Have you ever seen flamingos in their natural state? Ever been to a real live bat cave? Tropical beaches without people, any people?  Take a day trip from Provo and enjoy some time away from the crowds.

From shore, there isn’t a tremendous amount of sea life to see, at least from what I experienced.  This is why a snorkeling trip out to the barrier reef is the more desirable option.  Big Blue Unlimited offers a package deal where you snorkel the reef, walk with the iguanas of Iguana Island, and visit the pristine and deserted beaches around Fort George Cay. The guides are top rate and the snorkeling was pretty good, although not as good as some other places I’ve been (like Hawaii). During the reef trip, we saw barracuda, parrotfish, and even squid.  Iguana Island was worth the stop but for me the highlight was the boat ride out to Fort George Cay.  Sitting on the bow of a fast moving boat over crystal clear blue water was something I could do every day of my life and never tire of it.  The boat seemed to fly over the water and couldn’t have been smoother.  To top it off, the boat stopped at a deserted beach where we ate fresh fruit and brownies while listening to the other guests discuss such wide ranging topics like Argentinian politics, life in the islands, and traveling to Cuba.

Find Your Own Beach

I’d say the most relaxing beach we went to happened to be right by the place we rented. We could start and end our day by walking a couple of hundred yards to the water where we’d find only two or three people on the sand or in the water. We brought my wife’s stand up paddle board down with us and just splashed around, content to be relaxing at a beach we didn’t even know the name of.

Know Before You Go

You don’t need more than maybe five or six days.  Any more than that and you may run out of things to do (which may be exactly what you’re looking for).

Be ready to fork out big bucks on food if you don’t stay at an all inclusive. These islands are among the most expensive in the whole of the Caribbean.

The islands felt mostly safe.  There were a couple of areas that felt a little uncomfortable at night even though nothing ever happened to us.  However, in the weeks after leaving the islands, two Americans had been shot in separate robberies. In hindsight, those ‘uncomfortable’ moments now seem a little unsettling.

The tourist bureau touts the Thursday Fish Fry as the big thing to do where locals and tourists mingle together to eat, drink, shop, and listen to island music.  There is really no mingling between the locals and the tourists unless you consider buying something ‘mingling’. The food was the same food you can get anywhere on the island, the music was average at best, and the atmosphere was a little bit like that of a flea market.

So would I go back…maybe!