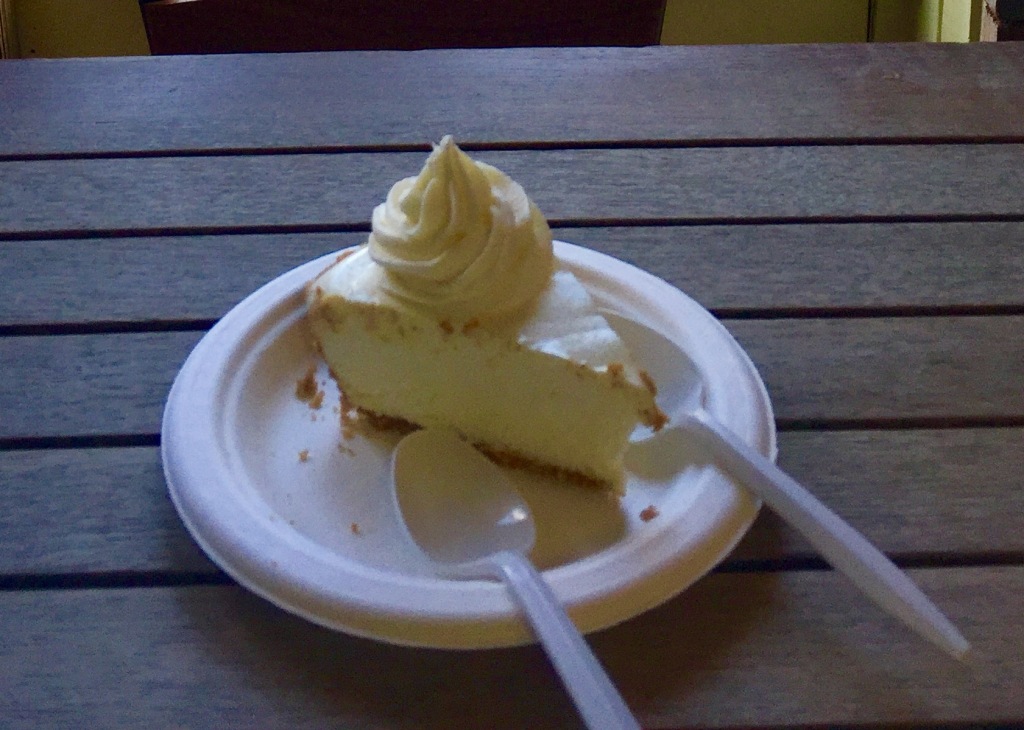 Creating a top five list of the best key lime pie in Key West is a tough job but someone had to do it, so it may as well have been me.  Just a couple of provisos regarding this list:

This is based upon my likes. I like to taste the lime, not to be overpowered by it but I do think it should be the primary flavor I taste. The crust needs to be good but honestly, most of the pie that I tasted had virtually the same style graham cracker crust.  Last but not least I like a thick and consistent texture.

This is obviously not an exhaustive list! It is nearly impossible to try every restaurant’s version of the world famous key lime pie. So if you’ve been to the Keys, you may ask ‘how could you miss this place or that place?’ so it will take loads of additional research before I can complete this task.  I encourage you to let me know if you have a favorite key lime pie and I will be happy to check it out.

Price is not a factor in any of the decisions here. I have based my decisions only what I think matches my tastes. It is not for me to decide how much is worth it to you to pay for a slice of pie.

So here it is, the Native Trekker ‘Top Five Places for Key Lime Pie in Key West’

The Key Lime Pie Company had a really good pie. The pies are made behind a glass window so you can see the magic as it happens. This pie had very good texture along with a standard pie crust. The only disappointing trait of this pie was the lime flavor was slight, almost hard to detect.  This was one of the larger proportioned slices sampled and was the lowest priced among the top five.

This place has really got it going on! With great Cuban food and the best live music we heard while in Key West, the only thing it needed to make it even better was a great slice of Key Lime. It delivered with a meringue style pie with a lime syrup drizzle that made it one of the more unique flavors we tried. This pie had one of the strongest lime flavors on the list which was great.  The texture wasn’t quite as thick as some but overall this was a very good pie and you can have it in perhaps the best atmosphere in Key West.

This place is another Key West locale with a great vibe.  The outdoor seating area resembles some of the great courtyard restaurants in Santa Fe but with a tropical theme.  Blue Heaven has a great combination of lights, trees, and even wild roosters to go along with their version of how to do Key Lime Pie.  Theirs is another of the Lime meringue style and it didn’t disappoint. It had a great blend of lime flavor, with a good crust and texture.

Jimmy Buffet’s entry on this list may come as a surprise to some but we have consistently had really good Key Lime Pie every time we’ve been there. The atmosphere at Margaritaville is very different than the others on this list and has more of a cheeseburger in paradise feel to it, with music videos playing on a giant screen with a pirate like decor.  The pie had a nice thick texture with a really good crust. The only thing that could have made this pie any better would be for a slightly stronger lime flavor. They even get double bonus points for giving you your margarita in a to-go cup!

The Banana Cafe ended up being a real surprise to us as the number one Key Lime Pie in Key West.  Despite its name, this is primarily a French style restaurant and it made the best Key Lime Pie of anywhere we tried.  Although Key Lime Pie is not often associated with French food, it is a ‘must have’ if you want to have a restaurant in the Keys. So if you look at the criteria I mentioned in the beginning, the Banana Cafe checks all of the boxes.  Great crust, texture, and most important to me, I want to taste the lime and I certainly did.

So there you have it! The Native Trekker Top Five Places for Key Lime Pie in Key West.  I plan on returning to try more and turn this list into a Top 10 someday. Maybe the next list will be a comprehensive Key Lime Pie list of the entire Florida Keys, who knows. The research has exhausted me and I need time to recover.

P.S. – I’d love to hear if you have any suggestions to check out for next time!